Friend or Foe? Rescued by an Orb-Weaver Spider! 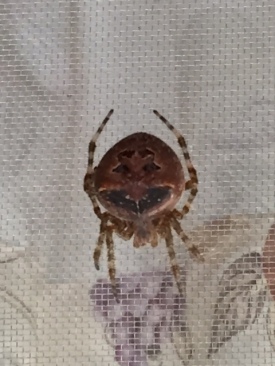 Have you ever squished a big, really scary-looking spider? I confess; I don’t squish them, but I do occasionally panic and call in my hit man—especially if they’re in the bedroom, kitchen, or bath. But this week I’m reconsidering my former offender relocation program in which I use an old yogurt container to carry trespassers outside.

Orb weaver spiders love our deck. They grow into enormous (not all that big by Australian standards) arachnids. Their web fibers are so dense that we’ve had to free a trapped hummingbird more than once. (One died from the stress. The other flew away.) In the spring, my husband relocates large spider egg sacks away from the house, but even so, by fall we host a few dedicated spiders dangling from roof corners we can avoid. Friends tell us we’re slightly mad for allowing any spider to stay. We tell them inside means death, but outside is safe territory. It’s our idea of playing fair.

Recently, my husband performed an impressive evasive dance while we were walking as he frantically brushed a bug away from his neck. He described his attacker as a large (over an inch in length) black-and-white beetle with long antennae (maybe an Asian Longhorned Beetle). I laughed. After all, it was a beetle, not a rattlesnake. How much harm could it do? When we Googled it, we discovered it bites only when threatened, although it can sting. We thought the worst news was that this beetle eats hardwood trees. Not being members of the poplar family ourselves, we thought we were safe.

However, our neighbor learned differently. He was working on his car and was bitten by a beetle that fit the description. More than a month later, he’s just now recovering from the parasites the bite introduced to his blood. According to the hospital, he could’ve died. My husband and I looked at each other as we heard the story. I apologized for laughing about the assassin bug.

Now the heroic part: The next time we saw an Asian Longhorned Beetle, it was dinner for one of our orb weaver spiders that had captured the beetle as it flew around our deck (perhaps searching for my husband!). We read that this beetle has no known predators in the United States, but I can tell the entomologists that these beetles probably don’t care much for our local orb weaver spiders. And, because the spider survived, I conclude it enjoyed the hearty meal.

It isn’t easy to tell good guys from bad guys. For one thing, people aren’t all good or bad, and—apparently—neither are spiders. Once before a black widow spider saved us from a scorpion. You never know who’s going to be there for you—or not.

This entry was posted on October 8, 2016 by Personal Journeys with Gramma in Life Stories and tagged #PersonalJourneyswithGramma, #SusanAdairHarrisAuthor, Being Judgemental, Being There for Others, featured, Friend or Foe? Rescued by an Orb-Weaver Spider!, Friend vs. Foe, Good vs. Bad, Good vs. Evil, Life Stories.