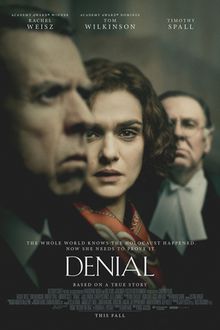 Last night I slipped the 2016 film DENIAL into my DVR and was immediately mesmerized by the perpetual struggle of truth against lies. I had ordered the DVD from Netflix because of glowing reviews. I thought I knew what to expect from the true story. I wasn’t prepared to learn so much.

In 1996, David Irving–a Brit who advertised himself as a historian who could “prove” the Holocaust never happened–sued American historian Deborah Lipstadt for disparaging comments about him she included in her book DENYING THE HOLOCAUST. Lipstadt (played by Rachel Weisz) had to battle the charges in Britain where the accused assumes the burden of proof in a libel case. In other words, instead of being presumed innocent as she would have been in the USA, she had to prove she was telling the truth:  Irving was a Holocaust denier. The strategy of her lawyers was to demonstrate Irving had deliberately distorted facts. He had intentionally lied to make his theories look good.

The stakes were huge. If Irving won, hate-mongers would have cause forevermore to equate the credibility of the assertion the Holocaust never happened with the facts of the murder of eleven million–six million of whom were Jews. In the bonus interviews included on the DVD, film director Mick Jackson commented that ideologues who speak outrageous lies can always find bigoted followers to agree with them.

Holocaust survivors attending the trial were aghast that anyone could deny the systematic annihilation and suffering they had witnessed and endured. Lipstadt expected them to be able to testify, but her lawyers knew Irving (who represented himself in court) would humiliate them until they would make mistakes in retelling their emotional memories–enough for him to gloat they couldn’t have been there. Instead, Lipstadt’s legal team included historians famous for their attention to the details of fact. They wanted to catch Irving in his lies.

No one was certain how the judge would rule. He explained that someone who believes his lies is not, technically, lying. He is simply deluded. However, truth and lies are not the same. Lies depend on deliberate distortion. After the trial (in which Lipstadt did not speak in order to maintain focus on the veracity of David Irving), Lipstadt explained that people can lie as part of free speech, but they must be held accountable for those lies. The British legal system provided an opportunity for the truth to come out.

As someone who has always been a fierce defender of fact differentiated from opinion, I applaud the idea of accountability. When we fail to hold liars accountable for their falsehoods, we leave the solid footing of civilization. We may prefer to hear what we want to hear, but we NEED the truth. We need reporters, intelligence gatherers, and legal analysts who ferret out the facts. We need to look, unblinking, at the world around us–past and present–so we can make wise choices for our future.