The Music of Ideals 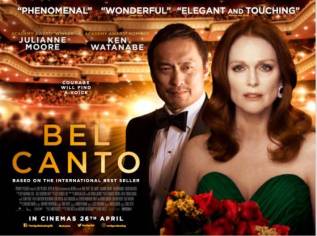 In these times of division and mistrust, many of us long for superficial divisions of party or culture or gender to fall away to allow us to meet through our commonalities as human spirits. The film BEL CANTO performs that surgery for us.

From a book by Ann Patchett based on a real hostage situation that occurred in Lima, Peru, the story begins with the performance of an American opera star Roxanne Cross played by Julianne Moore. She has appeared, as she describes it, reluctantly, only when the price for her single performance was high enough. She is to sing for an eclectic audience of the wealthy—theoretically to include the president of the country—in a posh mansion. However, when guerillas halt the performance and seize the mansion, they discover the president stayed home to watch his novella (a soap opera) on TV. Trapped by armed forces surrounding the mansion, the rebels decide to keep everyone inside until their demands for their comrades to be released from prison are met. After Roxanne’s male assistant/pianist is accidentally killed, the guerillas agree to release all the woman and children…except for Roxanne, who is too valuable as a hostage to relinquish.

Days stretch into weeks, and the hostages and their captors begin to experience one another as fellow human beings with talents, dreams, and desires. Roxanne’s beautiful soprano voice seems to transport all those inside as well as the local people gathered outside to a higher realm where beauty is more important than power. Roxanne enters a relationship with a Japanese businessman played by Ken Watanabe as his translator falls in love with one of the guerillas, a particularly intelligent young woman named Carmen. The atmosphere inside the walls of the mansion compound becomes almost fanciful as everyone pretends their utopia can last forever. It doesn’t, of course, but the message remains. What if we lived past the exteriors of one another to the essences or souls beneath?

Long ago, when the literary vision of a mythical Shangri-La was a popular alternative to a war-torn world, readers and film viewers alike couldn’t help but sigh and wonder if humankind could ever be capable of peace and understanding. With hate rhetoric and manipulation staining our air, we find ourselves back at the same question. Is idealism foolish because ideals are impossible? Even if we can never fully reach that perfection, is striving toward it still worthwhile? I think so…if for no other reason than to allow us to witness a beautiful empathetic world hidden beneath the icy darkness. Knowing it’s there is a comfort.