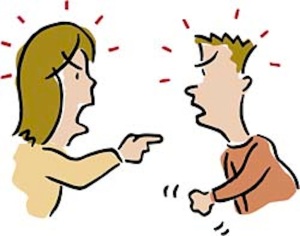 Let’s say you and someone who is important to you NEVER disagree.  Does that mean your relationship is perfect?  Probably not.  No matter how much you care for one another, you’re different people.  You can’t honestly agree about EVERYTHING.  Somebody’s fibbing.  So, when two people always agree, somebody has no voice.  If someone is giving in all the time, and the other person is letting that happen, is that good?  Does the person who’s giving in feel empowered?  Is that love or control?

Conflicts are not always bad.  Sometimes disagreeing, bringing an issue out into the light where you can both talk about what’s wrong, is the only way you can fix things.  What happens when you gobble down problems, pretending they aren’t there?  They get worse.  You start to resent the other person.  You might start keeping a mental list.  If you don’t tell the other person what you need, chances are you aren’t going to get it.  Even if the other person loves you very much, he or she probably isn’t psychic.  He or she may not even know you’ve felt upset.  You have to be brave enough to say what you’ve been thinking.  A good conflict takes your relationship to a better place when it’s over.

Sure, if you bring up something that’s bothering you, you and your important person may feel unhappy for a little while.  Maybe you’ll even feel a little angry.  But don’t stop there.  You can take breaks to breathe and think, if you want.  Sometimes that’s a good idea.  But don’t quit.  Take turns being honest about what you want and need in the situation.  Make a rule that the person listening can’t disagree while he or she is listening.  He or she can ask questions only if he or she doesn’t understand.  Then comes a hard part:  You have to listen to what the other person has to say.  No arguing.  No sticking up for yourself.  Just listen.

Next it’s time for each of you to say what you really need out of the situation—not everything that would be nice to have, but what do you really need so you can stop feeling so upset?  Is there any place where the two of you can agree?  Is there anything you would be willing to give up to get what you need?  How about the other person?

Another hard part is the two of you have to stick to one problem at a time.  You can’t talk about EVERYTHING that’s been bugging you at once.  You could have quite a list if you’ve been swallowing lots of problems.  Solve one problem at a time and then celebrate.  Leave the other problems for other days—even if you want really badly to use them to swat the other person with a couple of good head shots.

Maybe the problems are just too big or impossible to negotiate fairly—for example, if you want children and he doesn’t.  Other problems are too small to be worth a big discussion.  If something truly isn’t important, let it go.  Why risk good feelings for something that doesn’t matter, anyway?  A bad conflict takes your relationship to a worse place—but, maybe it was headed there anyway.