Sticks In An Anthill 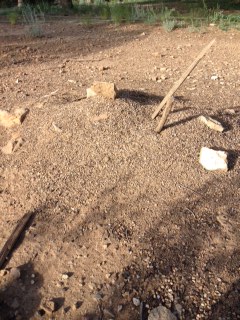 What do you see in the photograph?  Yes, it’s a red anthill.  Yes, those are sticks and stones the ants didn’t design into their architecture.

When I first noticed the anthill, I was annoyed.  My husband and I had lectured our grandchildren about harassing the wildlife—ants included.  Although we don’t welcome unwanted visitors such as mice, packrats, and spiders into our home, we try to teach the grandchildren to have respect for the life that flourishes on the property.  To us, the sticks and stones protruding from the anthill looked like further proof that cruelty is an inevitable part of human nature.

We turned on the television to see more shootings than we had the day before, more evidence of people in power placing selfish gain above the common good, and more examples of rich people enjoying advantages the rest of us can only watch with our noses against the shop windows of life.  We’re told we’ll soon be battling for clean water and food.  The “blessings of prosperity” mentioned in the Constitution belong primarily to those who can afford them, as they’re willing to remind the rest of us as though we deserve no more than our lot.  Human nature appears to be without much light.

“It looks like someone has been messing with the ants again,” I told one grandson. 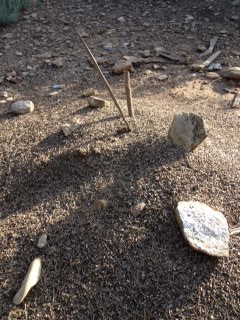 My lesson in human nature turned slightly.  I thought of the many times our country or special groups have forced “improvements” of one sort or another onto another culture or country.  We didn’t ask first.  We didn’t always want to hear the answer.  We wanted to change something, so we did it.  Sometimes our intentions were pure.  Sometimes we thought we were anticipating a need.  Sometimes we told ourselves we were doing good because we had ulterior motives—something we wanted regardless of the consequences to someone else.

What did the grandchildren gain from giving the ants observation towers?  A sense of control.  We as human beings feel an urge to control one another.  We change things such as the nature of seeds and water distribution and what other people are allowed to do or say–because we can.  People who don’t want to take the trouble to learn how to make their voices heard simply kill–like the grandchildren stomping on ants, because they can.

How did the ants view the sticks?  The sticks probably crashed through carefully constructed passages, perhaps killing or maiming members of the population.  I couldn’t say if the ants were glad to have access to dead grasshoppers.  Sometimes terror comes with certain side benefits.  What do you think of the sticks?

This entry was posted on July 18, 2015 by Personal Journeys with Gramma in Musings and tagged Control, featured, Human Nature, Intentions, Life Lessons, Musings, Respect for Life, Respect for Wildlife, Sense of Control, Wildlife.