When Women Fight Each Other 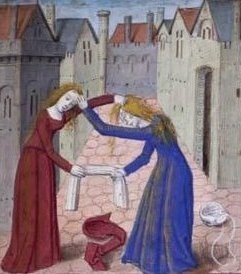 “Cat fight!”  I remember when the spectacle of two females fighting was considered a titillating entertainment.  Perhaps it still is in some circles.  Today I read fallout from a digital-confrontation between women—competition, jealousy, one-ups-man-ship, disrespect, control.  FLAG THROWN!  UNSPORTSMANLIKE CONDUCT!  Trapped in a male-dominated world, some women have adapted traditional male competition into their own backstabbing, face-clawing, distrustful, dishonest scramble for dominance.

Brain research tells us that female brains are hard-wired for cooperation and building community.  So what goes wrong?  As I said, traditional male-dominated society chortles at strong women trying to copy masculine power.  We are set against one another (and sometimes set ourselves against one another) in the hope that we will damage each other enough to de-claw us—to send us whimpering back to our kitchens, bedrooms, and nurseries.  But when women are shamed and beaten into submission, the society loses.  We can’t contribute much when we’re sitting among the cinders waiting for a prince to save us.  (“Woe is me!”)

Recently, I communicated with a woman who was frustrated by the apparent triviality of female communication—so many hearts and kisses and cute little cartoons.  I reminded her that many women have been mocked and abused physically and/or emotionally until they don’t readily share their more serious thoughts.  They begin communicating in a secret language that skims the surface of sisterhood and pain and hope for tomorrow.  The secret language appears to demonstrate how very superficial and childish women are.  It comforts those (male and female) who want to believe that women were meant to be subservient.  No one can be threatened by these messages—even insecure females talking about themselves.  Don’t be fooled.  Few of these women are as shallow as they seem.  They are reaching out for support.  When/if they feel safe, the messages will usually deepen.

Long ago, I was the victim of a female witch hunt.  I seemed to be too successful, so that had to mean I had dark, ulterior motives.  I was devalued by other women who might have benefitted from my success if they had been able to see it as a boon and not a rebellion.  We were all made less by the confrontation.

Women have the potential to be extraordinary leaders—more sensitive to the needs of subordinates than most men would be, better at marshaling cooperation and building coalitions—generally operating with more stamina, superior multi-tasking, and a smaller need for control.  We often buy into the view of women designed to be background decoration, when we could be, if not always leaders, then powerful full partners to our action-oriented male counterparts.

A female friend once remarked that she couldn’t believe how often women sabotage one another.  Sabotage is an act of desperation, of feeling powerless and hopeless, of abject jealousy.  I’m a member of more than one female group actively dedicated to bonding with other women and what women can contribute to a healthier, happier society.  History contains many reports of women who essentially stopped wars and initiated positive social change.  Men don’t need to fear us any more than we need to fear ourselves.  Once we believe our voices are worthy of being heard, we’re here to help.  It’s okay to function beyond the kitchen/nursery/bedroom.  We can teach our daughters to stand valued as human beings.

4 comments on “When Women Fight Each Other”

This entry was posted on November 7, 2015 by Personal Journeys with Gramma in Musings and tagged Being Worthy, Better than Stereotypes, featured, Musings, Quest for Equality, Quest for Inclusion, Women and Social Change, Women are Worthy, Women Fighting Each Other, Women Have Value, Women Set Against Each Other, Women's Potential.