“This is not the Medicine You Seek”—In Profit We Trust 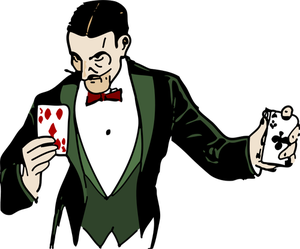 In STAR WARS, Obi Wan Kenobi’s Jedi mind trick convinces an enemy guard that he isn’t seeing what he’s seeing.  Maybe the Jedi mind trick is closer to reality than we think.

Everyone dreads being a fool—discovering the expensive home you just bought is resting on contaminated soil, an unstable hillside, or over a sinkhole, for example.  The problem most people have is that they aren’t scientists—and even if they are scientists, they know about only a specific area. In other words, we’re easy to fool because we have to trust those who tell us they know better.

In my case, a realtor “forgot” to tell us about the existing gas drilling lease on the property on which we were about to close until we had already sold our previous home and had nowhere to stay with our horses, dogs, and cat while we pursued an appropriate lawsuit.  The result is we live in the middle of fracking and methane wells.  An energy company representative told us that the huge water pit that was dug beside the well would be suitable as a natural hot tub.  It was, in fact, highly toxic and had to be fenced away from the livestock.

In the independent series THE TRUTH ABOUT CANCER: A GLOBAL QUEST, Ty Bollinger hosts a nine-day examination of research, myths, and facts about cancer therapies.  In the first two-hour segment, doctors from several countries, scientists, patients, and historians as well as court records and published studies describe a purposeful, concerted effort long ago by Rockefeller and Carnegie to discredit all forms of medical treatment that don’t involve patented drugs (the ones companies can own and manufacture).  Previously, research into natural remedies (such as foods and herbs) had won Nobel Prizes.

The smear campaign was so successful that today cancer doctors in many “advanced” countries (including the USA) can lose their licenses if they don’t urge their patients to accept chemotherapy and radiation, regardless of research that questions the effectiveness and even the ethics of use.  American parents who don’t want their child stricken with cancer to undergo the “standard” treatment can lose custody to the state.

The conspiracy against so-called natural therapies worked so well that most are not covered by any insurance.  For example, the price of thermography—a noninvasive alternative with less risk than mammograms—is prohibitive for most people.  Meanwhile, the patented drugs we are told are our only hope can also be exorbitantly priced—although the insurance companies endorse many of them.  Oddly (?), we’re told many expensive, dangerous formulations MUST be taken daily—perhaps forever.  The profit margin is high—and predictable.

Doctors know what they’re taught in medical school, and medical schools teach “standard practices.”  Few doctors have the time or statistical expertise to research the history behind the information delivered to them by the drug companies.  They work hard to do a good job with the resources they have. The doctors or facilities that dare to involve themselves in alternative practices are harassed by the agencies that are supposed to protect consumers from fraud, regardless of how effective the practices prove to be.

Why should so-called BIG PHARMA and possibly the AMA—one of our most trusted institutions—lie?  We already know the answer.  Profit takes precedence over human life.  Today, many of the “discredited” therapies are regaining popularity among rebellious patients because of their records of success.  Personally, I have experienced several “alternative” therapies I would use again, although it hurts to pay for insurance that doesn’t cover them.  (I also use standard care.)  Cancer patients are willing to travel out of the country to access banned treatments.

Recently, after an outcry by citizen groups, the Senate rejected a bill called THE DARK ACT that would’ve made labeling foods based on genetically modified crops (GMO) voluntary, so consumers wouldn’t have to know what they were about to eat.  Informed consumers are willing to pay more for organic, non-GMO food, and they want banks to be held accountable.  We want to have the facts and the right to make our own choices.  Who do you trust?  You’d better investigate.

This entry was posted on April 17, 2016 by Personal Journeys with Gramma in Musings and tagged #PersonalJourneyswithGramma, #SusanAdairHarrisAuthor, Conspiracy Against Natural Therapies, featured, In Profit We Trust, Investigate Before You Choose, Musings, Natural Remedies, Natural Therapies, Profit Takes Precedence, Smear Campaigns for Corporate Profit, The Dark Act, The Truth About Cancer: A Global Quest, This is not the Medicine You Seek, Trust, Trusting in "Experts", Ty Bollinger.