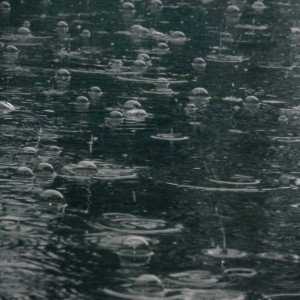 As in most areas of the country (and maybe the world), our local weather has been unusual. We live in a semi-arid area (traditionally), but recent upheavals began with a heavy blizzard that killed most of our large hummingbird population as it interrupted warm spring. The next morning we found one poor little guy still huddled on the window frame sheltered by our covered deck. He died of hypothermia. This week dawned with a daylong series of thunderstorms—one after the other (including hail and tornado warnings)—followed by more days of nearly constant rain. Rain is generally good news around here, of course, since we’re known for frequent droughts and wildfires. But like anything else, rain can be good, bad, or both.

A good rain rinses away weeks of dust and pollutants sticking to the trees. Suddenly, the world looks brighter and smells better. Fledgling plants slurp up the bounty and the sad brown earth becomes a carpet of green. Horses must be timed in the pasture so they don’t gobble too much new grass as it appears…and make themselves seriously ill. (Horses can’t vomit.) Tiny wildflowers spot the ground with purple, white, and yellow. Splayfooted toads crawl out of hibernation, croaking their muddy passion to potential mates and everyone else. (Our horses used to be afraid to enter the pasture after the first rain of the season, thinking they had somehow entered a 1950s horror movie of croaking “THEMs!” and were about to be eaten.) Through the blossoming hills, the streams in the arroyos flow freely and the local lake is full.

A bad rain washes away landscape features people wanted to keep. My husband and I spend quantities of money every summer replacing the gravel on our sloped driveway again and again and scraping the mud of the adjoining non-funded bit of county road flat so it will be passable to passenger cars as it dries. Over 100 miles from us, rivulets that began on wildfire burn scars in the forest become torrents that turn highways into riverbeds. Cities elsewhere that suffer flooding post photos of traffic, homes, and livestock being washed away. Less fortunate people may be caught in huge mudslides that destroy outbuildings, homes, cars, and sometimes families. Bad rains kill people.

I think about all this as I enjoy an hour or so of sunshine…with dark menacing clouds looming on all sides—again. I think about the storm raised by the firing of the Director of the FBI as he investigated probable corruption and about all the programs that are being cut by executive order as the majority party cheers. I’m hoping this political storm isn’t the set-up for a disaster film that will never be made in a less free world. I’m hoping the flood of change will force us all to be more mindful of what makes happiness and how easy it is to be flimflammed by sales people/politicians. Perhaps when the clouds part (whether by Nature or determined action), our country will be greener and we’ll be better stewards of the democracy our predecessors struggled, fought, and died to preserve.