Nice Guys and Their Finish 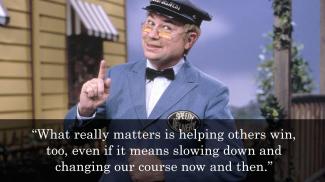 Tough. Ruthless. Powerful. Sexy…Nice? When was the last time you watched a popular film in which the lead character was described as nice? “Iron Man—not only a genius and dangerous but also nice!” Even shows ostensibly designed for kids of all ages such as the Marvel series or the Star Wars franchise feature heroes who are brave, fierce, sometimes honorable, but nice? Who aspires to be nice? Calling a blind date nice suggests you’re about to embark on an evening with a nightmare.

Nice is old-fashioned, the stuff IT’S A WONDERFUL LIFE is made of. Even cartoon characters are rarely nice—as in polite, thoughtful, or kind. They laugh at and play tricks on one another. They battle and call names. Kids copy them. The closest we generally go to nice is friendly. We hope for friendly service, friendly locals, friendly co-workers. Nice conjures images of someone meek—hence weak. Enter Mr. Fred Rogers of MISTER ROGERS NEIGHBORHOOD. One popular rumor insisted Fred McFeely Rogers had been a deadly Navy Seal before he donned his cardigan. Perhaps people didn’t want to be seen liking someone who was so nice and thought an action hero past would make him more palatable. But no, Mr. Rogers wasn’t an action hero. He was heroically nice. 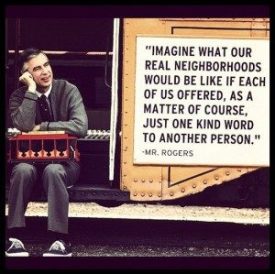 The biographical film WON’T YOU BE MY NEIGHBOR reveals the pitfalls of being truly nice in a world that showcases bullies. Protesters shouted that Mr. Rogers ruined their lives by making them feel special as children when they weren’t. They accused him of being too tolerant. Like most bigots, they seized upon a scrap of truth and wanted to shake it until they felt they had control.

Fred Rogers was an ordained Presbyterian minister, but he believed in living his beliefs instead of merely preaching them. He did, indeed, believe everyone matters. He despaired as he watched children being brushed aside or treated as sucker consumers instead of as small, vulnerable people with full sets of emotions already on board. He wanted to take a confusing, frightening world and help the very young understand and cope with the chaos around them. He wrote and delivered programs and songs about difficult subjects such as war, death, and prejudice, but he allowed his audience members to feel safe and calm. He remembered being a child who was frequently confined to bed with illnesses. He remembered his thoughts. Children recognized a champion and flocked to him. Adults dismissed his programs as having low production values. The shows were so gentle that most adults couldn’t slow down enough to realize what was going on. I was one of those adults.

As trends delivered a world that was increasingly cynical and confrontational, adults sought his advice. He told a graduating class they didn’t have to do anything sensational for people to love them. He felt the pain of 9-11 as he tried to reassure a terrified nation that our job is to be repairers of creation by sending out kindness to those around us. In his show, his tiger puppet Daniel spoke for him when it was difficult for him to voice his truths—such as his own fears and insecurities. He had an idea that if we could raise children to feel valued and loved while sharing honest emotions and compassion, we would live in a nicer world. He said everyone needs to know they can love and are lovable. With all due respect to the entertainment of flashing swords, spraying bullets, and tense plots, I would prefer to live in a kinder reality. I want to be that neighbor. Lots of people feel the same way. We aren’t ashamed to be nice.

This entry was posted on October 5, 2019 by Personal Journeys with Gramma in Musings and tagged #DeathLostDominion, #PersonalJourneyswithGramma, #SusanAdairHarrisAuthor, #TheWomanWhoSawSouls, Children Should Be Valued and Loved, featured, Heroically Nice, It's a Wonderful Life, Making People Feel Special, Mr. Rogers, Mr. Rogers Neighborhood, Musings, Nice Guys and Their Finish, The Power of Being Nice, Won't You Be My Neighbor Movie.