The Loneliness of Isolation 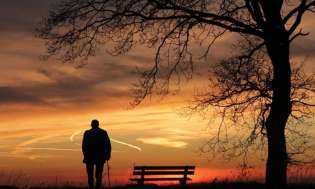 A friend I’ll call Debbie was losing her sight. As an infant, she had been incubated with pure oxygen which would eventually destroy her optic nerve. Others victimized by the same medical error had lost sight many years earlier. She was bright, funny, and independent, but soon she would move across the country to live with her sister who insisted on caring for her. In the meantime, she and I walked to the Dairy Queen from our apartment building almost daily, and she instantly forgave me when, engrossed in our conversation, I unwittingly walked her into a low-lying branch I had automatically stepped around. “I’d rather you forget I’m blind,” she told me, rubbing the lump on her forehead, and I knew she was sincere. She was weary of being avoided for being different.

Isolation kills. The elderly who sit alone die earlier. Suicide rates rise among people—young and old—who lose hope of belonging. For increasing numbers of people, quarantine is providing a glimpse into what it feels like to be sidelined from the mainstream even temporarily. Luckily, most have access to social media or at least cell phones. But what do you discuss when you don’t go out any longer? Suddenly even young people experience some of what those relegated to nursing facilities face daily—the scourge of isolation. They must become comfortable with their own company. If electronic diversions lose their challenge, where can they turn? Art? Writing? Music? Electronic courses? What can those who don’t have unlimited electronic access or other resources do?

Solitary confinement has been and still is used as a cruel punishment because of the emotional damage it can wreak. We need one another in a very real physical/emotional sense. Add to the quarantine situation a credible risk of death, and the toll on emotional well-being becomes nearly overwhelming. We who have depended on fantasy and social connections must suddenly find sterner stuff to sustain us.

We need to be recognized as valuable individuals even if we’re bedridden. We want to believe someone cares even if our problems aren’t unique. When I broke my wrist, I had no right to feel hurt when the only physical get well card I received read, “To Dave’s wife, We wish you a speedy recovery.” Dave’s wife? At least someone had taken the trouble to reach out, but my identity felt bruised. In balance, a young man I spoke to on the phone about cancelling an order for a recliner rose above our customer/clerk relationship. A former massage therapist, he took time to empathize with my condition and even explain therapeutic exercises that had been effective for him in the past. I’ll order from his company in the future. He heard me when he didn’t have to.

We need to appreciate the terrible risk those who must serve us are forced to accept due to duty or financial necessity—those who can’t go into self-imposed quarantine. How lonely they must be inside the bubble of their knowing—hoping against hope that their immune systems will be up to the task if they’re exposed. We can seize the troubling opportunity of COVID-19 to understand segregation and to decide to use that understanding to mitigate the pain for others—anyone forced into isolation for being sick, old, or merely different. Find a safe way to reach out—call, text, message. Hold connections close to your heart. Make new ones. Improve the society that will survive. Soften isolation for those destined to succumb.