The Fellowship of the Survivors 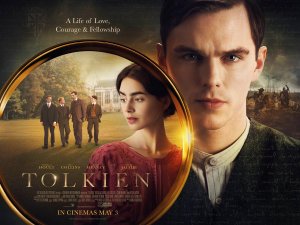 The incredible waste of war and the astounding resilience of the human spirit are two sub-themes in the film TOLKIEN about J.R.R. Tolkien, author of THE HOBBIT and the LORD OF THE RINGS trilogy, among other works.

The film begins with Tolkien’s beginnings as his family becomes impoverished by his father’s death. Thrown on the charity of the church, his mother does her best to entertain and inspire her two boys until she, herself, dies, leaving them orphaned. The boys are taken in by an aristocratic benefactress who also boards a young orphaned girl, Edith Bratt. An exceedingly bright young man with a penchant for art, language, and imagination, Tolkien is allowed into a school generally reserved for the sons of the wealthy. At first, the gap between their stations sets him apart, but his brilliance attracts the respect of a small group of young men who likewise aspire to creative expression. They form a lively brotherhood which fans of Tolkien’s novels can hardly fail to identify in his later characters. 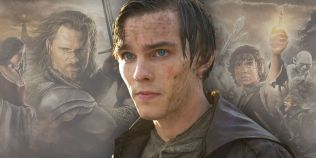 Meanwhile, Edith and he fall in love, although Edith is fully aware her own keen wit and imagination are hopelessly stifled as she plays mundane background tunes for her benefactress on the piano, although her fingers long to play Wagner. She watches Tolkien go off to Oxford with his mates with a sigh, knowing he’ll probably never return to her. She nearly submits to a loveless marriage only to escape her virtual servitude, but is saved by Tolkien’s last minute professions of commitment. She teaches piano as she waits for him to return from the war. Her devotion as well as the unflagging loyalty of a comrade make the difference in saving him. The talents of other members of the brotherhood are “gone to graveyards, every one” as the song says, although one loses his soul instead of his life.

The incredible power of love that Tolkien portrays in the Fellowship of the Ring as well as the romantic ties within his novels is a strong element for him, as it must be for us. As we look at the fear, betrayal, and strife bursting like errant fireworks around us, we can identify with an intense need for positive emotions to reassure us there is a better way and we can vanquish the evil curse of the ring. Our love for one another makes us ultimately invincible. Love is immortal.

The unlikely success of an impoverished orphaned boy whose writings speak to diverse fans around the globe through time reminds us that perseverance even in the face of the most crushing adversity makes a difference. Tolkien will not believe his writings are nonsense. He can speak his own originally manufactured language fluently. Fantasy writers who come after him struggle to achieve the exquisitely detailed imposed reality, rich imagination, and humanity of his works. Those who refuse to be defeated can eventually win.

2 comments on “The Fellowship of the Survivors”

This entry was posted on June 20, 2020 by Personal Journeys with Gramma in Musings, Working the Craft: Reading & Writing and tagged #DeathLostDominion, #PersonalJourneyswithGramma, #SusanAdairHarrisAuthor, #TheWomanWhoSawSouls, #They'reInYourMind, featured, Fellowship of the Ring, J.R.R. Tolkien, Love is Immortal, Musings, Perseverance, Positive Emotions Needed, Power of Love, Prevailing through Adversity, Refuse to be Defeated, The Fellowship of the Survivors, The Hobbit, The Life of Tolkien, The Lord of the Rings, Tolkien Movie, Vanquishing Evil, Working the Craft: Reading/Writing.