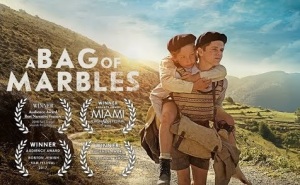 As our country tumbles forward into a jumbled, unknown future, my husband and I did our best on election night to remove ourselves from anxiety, but suddenly everything we heard seemed to refer to our situation.  For example, one of our favorite GEICO commercials features a group of panicked teenagers being pursued by a slasher.  One of the girls pleads, “Why can’t we just get in the running car?”

A boy fiercely replies, “Are you crazy?  Let’s hide behind the chainsaws.”  So the group huddles behind a curtain of hanging chainsaws in the garage whispering to one another as the slasher looks on.

The slasher slowly shakes his head in disgusted disbelief.

The narrator continues, “If you’re in a horror movie, you make poor decisions.  It’s what you do.”

I couldn’t help agreeing with the concept—especially since it featured a traditional girl giving in to lesser male logic.  It seemed applicable to the moment. 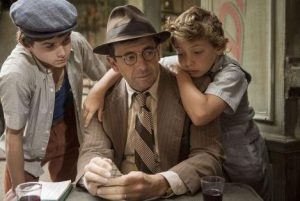 Then we watched the French film A BAG OF MARBLES, the true story of Joseph Joffo and his brother who were forced to flee Nazis across France when they were only boys.  In one poignant scene before the boys are sent off by themselves to be less visible, Jo’s father slaps him around at the dinner table, demanding to know, “Are you Jewish?” until young Joseph tearfully denies his truth.  The father tells him it’s better to be hurt than to never see one another again.  “Never, never, never tell anyone you’re Jewish.”  His is an argument for prudence, although he wants his boys to always feel proud of their heritage.  Later, when the Germans have been driven out of Paris, acting on the essential morality he learned from his heritage, Jo saves a collaborator family from vengeful deaths by bludgeoning.  The family rescued by the boy with the courage to stand up for them hadn’t actually sheltered him knowing he was a Jew.  He lied for them.  Did they then realize we are all flawed and deserve mercy—including Jews?  Probably not.  As we’ve seen, prejudicial hate burns deep.  Mercy depends on an ability to identify the essential importance of every person, an ability to recognize our commonalities.  It depends on unconditional love.

Finally, we turned to what we hoped was soothing standby entertainment, the film PLEASANTVILLE about a town stuck in the bland, painfully naïve black-and-white world of 1950’s television.  The idea that stood out to me this time was delivered by the boy who discovered he was more than he had realized in his modern life.  He tells his mother there isn’t a certain way life should be.  We create it and ourselves day by day.  The concept resonated.  I suddenly understood that we are here to be the best we can manage at the time, gradually progressing toward more goodness if we’re successful.  When the world disappoints us or when we disappoint the world, that’s part of the lesson—how we cope, what we do next.

What will we do next?  Will we panic and make bad decisions?  Or will we rise to the challenge of being kinder than we have to be, more empathetic than we’ve been?  The most important lessons are rarely easy.  I get it.

2 comments on “What Happens Next?”

This entry was posted on November 6, 2020 by Personal Journeys with Gramma in Musings and tagged #DeathLostDominion, #PersonalJourneyswithGramma, #SusanAdairHarrisAuthor, #TheWomanWhoSawSouls, #They'reInYourMind, commonalities, election night, featured, kinder than we have to be, Morality, more empathetic than we've been, Musings, prudence, What Happens Next?, what should be.