If You Feel Like a Ruin, Do You Preserve or Renovate? 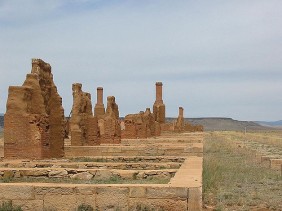 We all ultimately face a day when we look in the mirror and the person looking back is oddly different—older.  Me?  Older?  What is this evil magic?  And then we must choose the philosophy that will carry us forward.  Will we attempt to preserve what has been or renovate to something new?

Fort Union—an historic fort in New Mexico—serves as an illustration.  Once a stalwart outpost that provided provisions and protection to travelers on the Santa Fe Trail and southwestern forts that stood against hostile forces, it’s now a sad array of “melting” adobe buildings.  It’s a ruin.  Adobe doesn’t fare well against harsh weather, regardless of how much effort goes into preservation.  All that remains of most of the walls is an assortment of freeform blobs.  The regulations that allow for the fort’s continued existence as a national monument strictly specify that no renovation can occur.  The mission of the National Park Service on that site is limited to preservation and education. They offer photographs of the functions the bare foundations once supported.

Recently, as my husband and I walked the hot, windy paths that lead visitors around the perimeters of Fort Union, I couldn’t help but think of posts I’ve read that addressed aging.  I thought of photos of celebrities who have spared no expense trying to preserve the faces and bodies that made them famous.  At some point, those surgically altered faces become as garish and dysfunctional as the fort’s formless walls.  Time insists on change.

I’ll admit my stomach clenches when I see grand Victorian homes gutted, their glorious interior woodwork and elegant spaces scraped into sleek, sharp, modern lines.  All that remains is a book cover that lies about what’s inside. But I’m not a preservation purist.  I once lived in an historic home that was served by a coal furnace.  I woke to the creak of the furnace door opening beneath my bedroom and the scrape of a shovel delivering coal to the fire.  Coal doesn’t smell good.  The dust made me cough.  Old wiring and decaying plumbing are dangerous.  I do believe in renovation.

Speaking of people, few people of advanced age manage to sustain the stamina and prowess they once enjoyed.  They have to work hard to cling to an approximation.  Youth refuses to be held captive.  They must ultimately accept that change will happen, regardless of how they feel about it.  Many give up in despair, neither preserving nor renovating.

However, for people, renovation means accepting that the reality of your existence has moved on, while knowing that reality doesn’t have to be pathetic. You redefine.  You feed the parts of you that resist failure—your imagination, your curiosity, your wisdom.  You keep your current body in good shape.  You find new interests, new friends who are as resilient as you.  You discover new pathways to walk.  You create something fresh in the place of what you’ve lost. You die young at an advanced age.  Sign me up.

This entry was posted on July 23, 2016 by Personal Journeys with Gramma in Musings and tagged #PersonalJourneyswithGramma, #SusanAdairHarrisAuthor, Aging, Be Resilient, Change, Embracing Change, featured, Feeding the Grander Parts of Yourself, Feeding Your Soul, Fort Union, Getting Older, Growing Older, If You Feel Like a Ruin Do You Preserve or Renovate, Musings, New Pathways, Preservation, Preservation vs. Renovation, Renovation, Resilience.