THEM! Creepy Negativity is Coming! 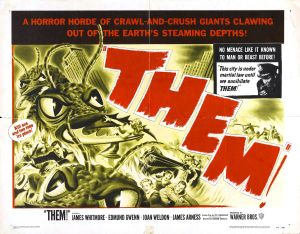 Only those who loved cheesy old late-night horror movies will recall a classic called THEM! about giant ants that had a bad habit of eating people.  I couldn’t help but remember the invasion this morning as I hurried to the bathroom to relieve myself.  I lifted the lid to discover a fat mouse doing a desperate dog paddle in the toilet bowl.  Meanwhile, in our living room, my husband had trapped three mice that may have entered through the masonry of the fireplaces.  They’re here!

How could a mouse enter my toilet bowl when the heavy lid was down?  My husband tells me a mouse doesn’t need much space.  Mice are opportunists—like the tidy lady bear who dispatched five hummingbird feeders on our deck last night.  They’re taking care of their personal interests before fall.

Bad things can creep into good places.  I imagine a devout, well-educated German couple witnessing the rise of Adolf Hitler: “Vat is
going on, Hans!”  It must have been a terrible surprise to discover that an advanced, ancient culture like Germany could allow someone so very sick to take over.  Lots of followers must have wanted to express their frustration by promoting someone totally unlike their previous leaders, not realizing they were throwing out much that was valuable in order to feel good in the moment.  Resistance after the fact didn’t work very well.

Although I tend to be a pacifist about trapping, my husband tells me I have to consider the big picture.  What are our greatest priorities?  We may have to sacrifice a few brave mice in order to prevent a takeover.  I think of our grandchildren and deadly hanta virus and I know he’s right.  We can feed the birds outside and look the other way when mice also enjoy the feast, but we have to draw the line at letting mice into the house.

Lately, we’ve heard plenty about Americans acting out—saying and doing things we once would’ve considered crude, hateful, and un-American.  The majority can’t be silent any longer.  We have to be firm when we say, “Enough!” We have to prevent the invasion of negativity, replacing it with positive action: honest two-way communication, transferring power from self-interests to representatives who understand that what happens to one, happens to all.  We’re in this house together.  If we tear down what’s working to get rid of people or policies we don’t like, we’ll end up vulnerable to international predators.  If we want what the preamble to the Constitution calls “a more perfect union,” we have to build it from Congress up.  And, while we’re building, we need to seal up the mouse holes.

2 comments on “THEM! Creepy Negativity is Coming!”

This entry was posted on July 30, 2016 by Personal Journeys with Gramma in Musings and tagged #PersonalJourneyswithGramma, #SusanAdairHarrisAuthor, Considering the Big Picture, featured, Honest Communication, Invasion of Negativity, Musings, One for All and All for One, Personal Interests, Power of Self-Interests, Replace with Positive Action, THEM! Creepy Negativity is Coming!.